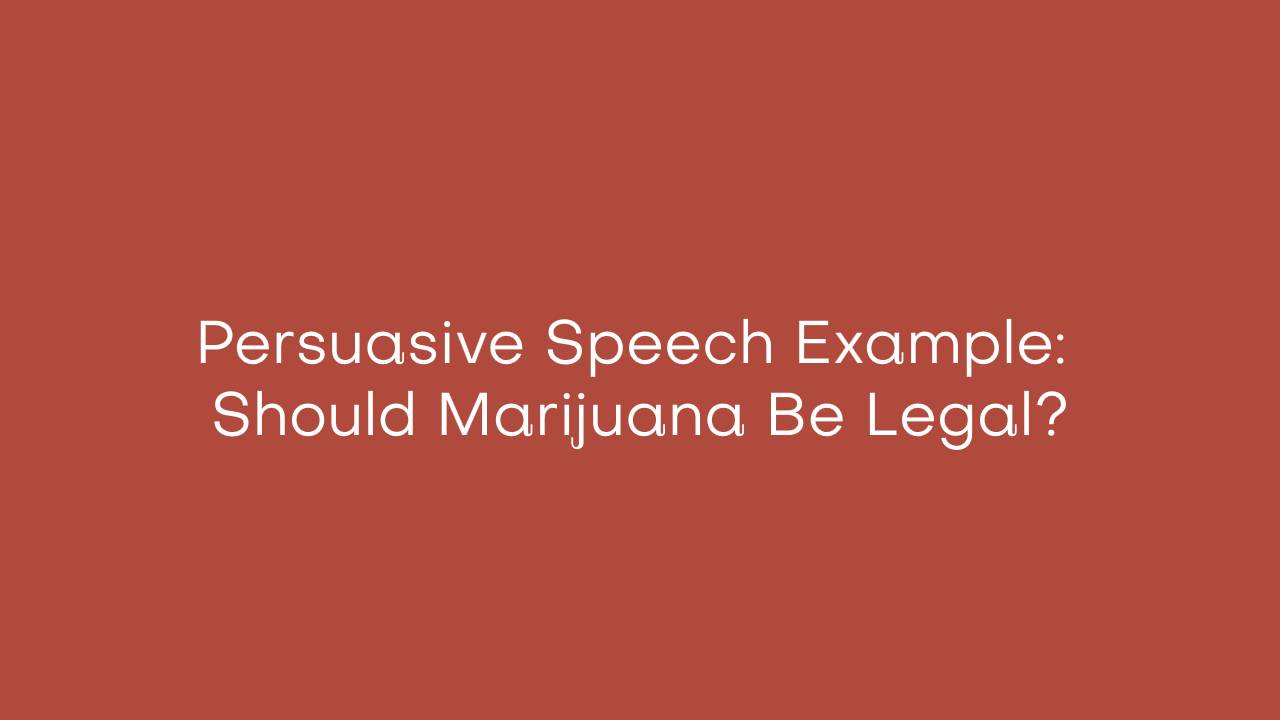 The debate on whether the use of marijuana should be made legal or not has been actual for many years. The proponents of the legalization of marijuana argue that this drug has more advantages than negative effects and should, therefore, be made legal. They add that there are even more dangerous drugs than marijuana, such as tobacco and alcohol, whose use has not been banned. Secondary smoking of marijuana has also been reported to pose less danger as secondary smoking of legal substances, more precisely tobacco and cigarettes. According to the opponents, marijuana is too harmful to be legal and should, therefore, be kept away from the market and out of reach of everyday citizens. They state that the negative effects stemming from the use of cannabis outweigh the advantages, and that if it was legalized, it could lead to an increment in the drug abuse and other negative effects of its consumption. Therefore, this paper defends the idea that the use of marijuana should be made legal, as its use has more advantages than disadvantages.

The first reason why marijuana should be legal is the fact that it is unconstitutional to prohibit its use. People have the right to make a choice of whether to use it or not, and should not be limited by the ban on its use. The government only reserves the right of limiting the choices if they lead to actions that endanger the lives of other people. The government may also limit such right if the individual poses risk to himself when he use marijuana. However, this argument is not logically applicable to marijuana, as it is not as dangerous as some drugs, which are already permitted, namely alcohol and tobacco. Moreover, health risks that are associated with the use of marijuana are not as severe as the ones resulting from such substances as alcohol. It has been reported that over 400,000 Americans die from illnesses linked to smoking every year. Annually, over 150,000 Americans succumb to illnesses caused by the abuse of alcohol. The number of people who die from marijuana-related illnesses is not as high as those form tobacco and alcohol, which, paradoxically, are legal. Therefore, individuals are entitled to the right to make a decision of either using marijuana or not. The government should not tell people what to do provided they do not pose danger or harm to others or themselves as a result of using a drug (Doblin & Kleiman).

Another main reason why marijuana should be legalized is its medical use. Marijuana was legally available in the American medicine until 1937 and could be bought as a nerve tonic. Marijuana as a medical drug is sometimes used for dealing with nausea, ache and muscle spasms resulting from cancer treatments, such as chemo therapy. It relieves warning signs of glaucoma, sclerosis, rheumatoid and other incapacitating illnesses. There are more than 60 chemical elements in marijuana that may be useful for the aim of treatment of Tourette, Hepatitis C, Alzheimer’s and reduction in the growth of cancer cells. One of marijuana’s chemicals may be used in helping people with insomnia. Cannabidiolic acid, which is also one of marijuana’s chemicals, is a strong disinfectant. The drug that has been liquefied in alcohol is helpful for people with skin conditions, and thus marijuana’s original medical use was as an ointment. “The leaves were once used in bandages and a relaxing non-psychoactive herbal tea can be made from small marijuana stems. It is relatively easy to extract chemicals from marijuana and put them into food or beverage, or into some sort of lotion using butter, fat, oil, or alcohol” (Doblin & Kleiman).

One more reason why marijuana should be legalized is that keeping it illegal is costly. In the United States, all parts of the government participate in the war on drugs. It puts the cost of the enforcement of marijuana prohibition on the American taxpayers who devote approximately $10 million every year. Consequently, over 734,000 people are arrested every year, and this number is way higher than the total number of people arrested for violent crimes, such as rape and murder. Making marijuana illegal is a waste of state resources, which should be concentrated on fighting grave and violent crimes. Additionally, it invites authorities into the areas of private lives of people and needlessly damages the lives and careers of many people who, without this illegalization, would be law-biding. Illegalizing marijuana only leads to the increment of the power of gangsters, as they sell prohibited products and receive huge profits (Khatapoush & Hallfors).

An additional reason why marijuana should be allowed by the state is because its prohibition is not effective and brings more harm than good. There is no proof that its ban leads to the reduction in the use of the drug. Drug dealers do not care if the buyer is below 21 as long they get the money. It is even easier for underage persons to get marijuana than alcohol, since alcohol is legal and is hence regulated in order to prevent children from accessing it. If the aim is to reduce drug consumption, the focus should be on honest programs aimed at educating the youth, preventing children from obtaining it and treating persons with drug problems (Joffe & Yancy).

The opponents of the legalization of marijuana argue that many negative effects may arise from such process. They state that marijuana’s legalization may make it easy for it to be accessed by children who, unlike the adults, do not have the capacity to decide what is right or wrong for them. Its authorization, according to the opponents, is giving a leeway for the usage of a drug, which is mainly a stepping stone towards the abuse of other hard drugs, such cocaine and heroin. They have also argued that the effects of consuming marijuana are similar to those of other drugs, which include the loss of control and addiction. They further allege that if marijuana is legalized, it will be easy for other hard drugs to become legal, too.

The debate on whether marijuana should be made legal or not has been present for many years. The opponents allege that marijuana is similar to other drugs with negative effects, such as addiction, loss of control and a leeway to the use of harder drugs. According to them, the negative effects are more important than the positive effects arising for the use and legalization of marijuana. The proponents of its legalization, however, assert that the advantages, which are inclusive of medical uses, allow people to make their own decision and reduce the taxpayers’ burden. As a result, the advantages outweigh the disadvantages. Supporters state that better programs for controlling the use of marijuana should be put in place, and this approach will be more effective than making it illegal. Based on the arguments presented by the proponents of the legalization of marijuana, it is more reasonable to make it legal.

Khatapoush, Shereen, and Denise Hallfors. ““Sending the wrong message”: did medical marijuana legalization in California change attitudes about and use of marijuana?.” Journal of Drug Issues 34.4 (2004): 751-770.